What Bnei Baruch Does Not Want You To Find Part 2

We are now continuing with a series of posts which would be very difficult to find without access to proper resources. We will be presenting articles by author Tomer Persico, a well known Israeli researcher of Jewish Studies and New Age Spritiuality, associated to Tel Aviv University. The professional translation of the articles has been financed by supporters of our search for truth regarding Laitman's thought reform manipulations through a web of deception called Bnei Baruch, or "The Factory".

In the introduction to his book “The Gates of Righteousness” Rabbi Yoseph Gikatilla, one of the first and greatest Kabbalists of 13th century Spain, begins with a warning worth heeding: “For the Sages have said: The Lord is most strict with the righteous ones .” Gikatilla tells us a simple thing: God demands the most meticulous adherence from his most righteous followers. Why do I open with this observation? Because I believe we should apply the same principle when we attempt to ascertain whether a certain spiritual teacher is a true guide, or not. And with this admonition I refer to Rabbi Dr. Michael Laitman.

In recent years the Israeli media has been airing, in printed and videotaped form, quite a few dialogues of some celebrity or other with said kabbalist rabbi. In these encounters Laitman assumes the figure of the omniscient sage, leaving his interlocutors to play the part of “He who knows not to ask” - the clueless son from the Haggadah whose father in tasked with “opening for him”, and showing the poor soul the way to the light.

And why celebrities? It appears that the Bnei Baruch movement has become most envious of its elder sibling, The Center for Kabbalah, which sports international superstars such as Madonna and Demi Moore, and also wanted to show that celebrities seeking meaning for their lives are willing to buy its wares. For ten measures of celebrities have descended upon New Age, and if The Center for Kabbalah and Scientology hath taken nine among them, Bnei Baruch also coveted a measure of false fame, also desired a measure of the golden calf.

Twenty-two celebrities made pilgrimage to Laitman, speaking with him in meetings that were also filmed and broadcast on the “Karma” channel, from rock star Arkadi Duchin and poets Agi Mishol and Ronnny Somek to MTV veteran Eden Harel, from investigative reporter Gideon Reicher to former IAF Commander Eitan Ben Eliyahu. Recently this series of talks was collated in a book (available for download free of charge here [Heb]), and this is a good opportunity to summarize the reading experience.

Well, bottom line first: The book is full of hogwash as a pomegranate seeds and as usual, the problems begin with presumption. Laitman writes two bad checks: One is the presentation of his method as “science” and the second is his claim to speak for all of Kabbalah. Let us dismantle these claims one by one:

“A science in every way”

So first, Laitman claims it's all scientific with him. It's “Not a philosophy nor a faith,” but “a science in every way” (p. 40). “Kabbalah is a science” (p. 219, and many places besides) he repeats, and proudly tells us that when he explains kabbalah across the great wide world, “scientists understand and accept it” (175). Well, I don't know what universe the kabbalist rabbi is living in, but even by Laitman's own testimony, in this very book, one can clearly see that any relation between him and the empirical world as science understands it is purely coincidental.

For instance, Laitman has an alternative history of the Jewish people: According to him, “Abraham was the first kabbalist” (100) and until the destruction of the temple the People of Israel lived as one big kabbalistic community. Upon the destruction “they all fell to worldliness” (132) and began observing the commandments out of compulsion.

The problem is that any history book about the first and second temple periods disproves this fantasy: Jews were never cut of a single cloth, and were always divided and conflicted internally, and most of the time actually worshiped idols. Truth is, you don't need a history book for that – it's enough to read the bible.

But the kabbalist doctor deals not only in rewriting history, but also in denying modern research. It is of course his right to refuse to be impressed by findings that place the time of the Zohar's writing in the 13th century; but not to say a single word about how his traditional approach, which he repeats several times and which holds that Rabbi Shimon Bar Yochai wrote the book in the second century, lies in stark contrast to research consensus, is not a behavior consistent with scientific standards. Laitman relies on the ignorance of his readers on these matters and feeds them falsehoods.

By the way, this rhetorical trick where you call your fabrications “science” was known back in the days of Rudolph Steiner, the founder of Anthroposophy, in the early twentieth century, and it is still with us today with movements such as Transcendental Meditation and Scientology. Everyone wants some of the wonderful translucence of science to rub off on them, and Laitman is simply towing the line of other movements and sects. On the other hand, since Laitman apparently was a scientist before becoming a kabbalist (He claims to have been in bio-cybernetics,) one could have expected a little more scientific integrity from him.

It's not only the scientific pretension that knocks holes in the rabbi's credibility, but also his presenting his method as the Kabbalah. Laitman is erudite enough to know that besides the school of thought he represents there are many different others, each rooted in the immensely rich fountain of kabbalistic wisdom. Taking sole credit for this popular brand is a little much.

I mean, is it “Kabbalah” that claims that has always claimed that “the basic laws are the result of human thought” (106) – or in other words, a Jewish version of “The Secret”? Of course not. Did “Kabbalah” always claim that reward and punishment “mean nothing” and that common man has no free choice (117)? Of course not. Did “Kabbalah” always talk about how “observing commandments is beside the point” (27), meaning its adherents don't need to observe Halakhic laws? Guess.

Just to make clear, I am in no way claiming that what Laitman teaches isn't Kabbalah. Kabbalah isn't static and like anything else, including Judaism itself, it changes with time (although it is true that the scope of this change is rather surprising.) It’s just that Laitman's presumption to be the sole representative of Kabbalah is simply inappropriate, and borders on fraud.

At the same time Laitman repeats the well-known claptrap about how “science is now discovering facts that Kabbalah has been relying upon for thousands of years. Well, rabbi, here's a newsflash: Kabbalah hasn't existed for thousands of years. It originated in the 13th century. That's what science has discovered. And if indeed Kabbalah knows facts that science has yet to discover, please don't hold back: Tell us one provable or disprovable new fact, and I promise that we'll all be very proud to escort you to the Nobel Prize ceremony in Stockholm.

So Laitman takes the name of both Kabbalah and science in vain. He feeds his listeners with fables as he baselessly pretends to global wisdom and complete certainty. He presents himself as a font of Kabbalic knowledge, and his listeners as babes in the woods who crawl to him to suck their fill. In the end they receive nothing more than a thin potion brewed by a witch-doctor.

Oh, by the way, anyone buying the book to understand anything about Kabbalah will be disappointed, since it says almost nothing about the teachings themselves, only about how good and wise and ancient and scientific those teachings are. Indeed, it appears that the book is not meant to introduce us to Laitman's Kabbalah, but rather to famous people who are themselves trying to understand Laitman's Kabbalah.

One last word, also having to do with false pretension: According to Laitman “all methods, save for Kabbalah, are based on the oppression of man” (29). I'm sorry, but the way to freedom from oppression begins and ends in knowledge of the truth. A road spun from fables and false pretensions cannot possibly lead there."  http://www.nrg.co.il/online/55/ART1/745/923.html

We are grateful to Tomer Persico and to our sponsor for funding this professional translations.

Our question: Is Laitman re-writing history or simply re-peating it by disseminating propaganda of xenophobia and anti-Semitism? 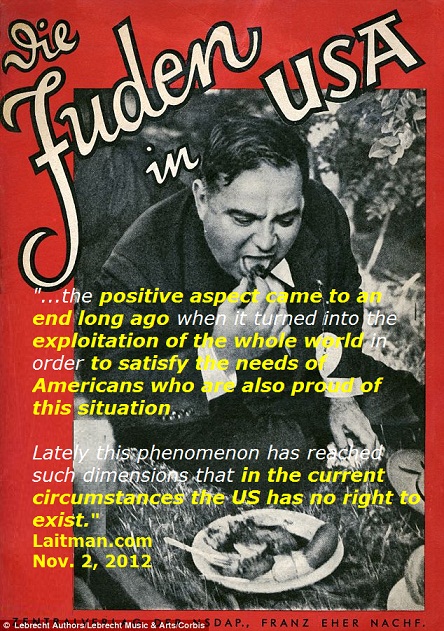